The most serene cat breeds are the ideal companions for a person seeking to chill with their feline companion. These calm cat breeds have generally laidback personalities, whether they’re sitting on the couch or snuggling in bed.

Cats spend a significant portion of their day sleeping, as you know. However, many cats like to get a little rowdy while they are awake, scampering about the house ornaments (hopefully scratching posts and not your furniture), and yowling. After all, cats are naturally energetic, and they require outlets for their energy throughout the day.

Keep in mind that every cat is unique; a traditionally calm cat may not be as quiet as you would think, and your typical shelter cat may be the ultimate couch potato. We recommend that you consider adopting a kitten or an older cat rather than purchasing a cat from a breeder, but we understand that many of the most laid-back cat breeds on this list are also some of the rarest breeds.

With that in mind, don’t forget that you may still adopt a lovely laid-back domestic shorthair from your local shelter; with the right amount of love and attention, any cat can develop into a wonderful lifelong companion.

If you’re seeking a new buddy, check out our article on amusing cat breeds or our affectionate cat breeds, both of which have a number of breeds in common with this list below. 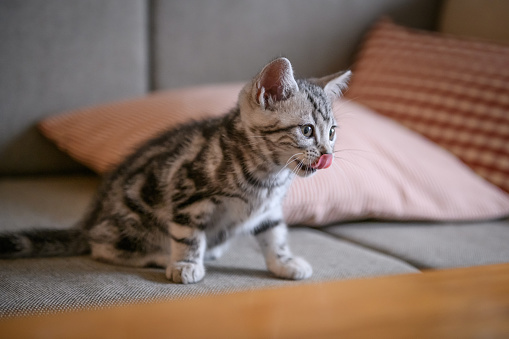 The British Shorthair is a calm cat breed that comes from the UK. It’s a medium-sized to a large cat breed, and males generally outweigh females. Male Shorthairs British weigh between twelve and eighteen pounds, while females weigh between ten and fifteen pounds. They have a small, plush coat that is dense. The coats come in a variety of hues, including blue, red, black, cream, silver, golden yellow, white, and smoke.

They also come in a variety of patterns and tones. British Shorthairs have an amiable disposition and frequently become more sedentary as they grow older. They are a large, beautiful cat that enjoys spending time with their owners. Many will follow family members about the home from one room to the next. Although you might not consider this breed as a lap cat, they do enjoy snuggling with their family. In many situations, females are more reserved than males, but there are exceptions to every rule.

Maine Coons are giant, gentle cat giants that can weigh up to 25 pounds. While they are quite energetic and playful, they are not hyperactive. The majority of people note that Maine Coons are also fairly calm. They tend to be very focused on others and may follow you from room to room.

The Birman, according to Purina, is one of the calmest cat breeds, originating in Burma where it was revered as a sacred act. It’s a medium-size to big breed with a medium to lengthy coat. Males weigh more than females owing to their greater weight of up to 15 pounds, while females weigh around 10 pounds. The Birman cat breed has large, blue eyes and is one of the most distinctive features about it. The seal point, blue point, chocolate point, or lilac point coat of a Birman is another aspect that distinguishes it from other cats. Another notable feature of a Birman is its playful nature. Birmans make excellent pets for families with other pets. They are very sociable animals, and they do not want to be the only pet in the home. Birmans also enjoy spending time with their families.

Himalayan cats are stunning, peaceful animals that choose calm environments. The majority of the cats are very quiet and laid-back, with many owners commenting that they’re really nice and loving. They can be picky about who receives their affection, though. These cats are sociable, fun, and low-maintenance. Himalayan cats are also extremely docile and quiet, making them ideal couch buddies for a night of binge-watching Netflix.

The Exotic Shorthair is known as the lazy man’s Persian. It has earned this moniker because it has some of the physical traits of a Persian, such as comparable face structures, but with a shorter coat that requires less maintenance. The Exotic Shorthair is a medium-sized breed that weighs between seven and fourteen pounds for males and six and ten pounds for females. They have a short, plush, and thick coat that is either solid or striped. The following colors are available: black, white, lilac, silver, chocolate, cream, red, and blue.

Ragdolls are not only one of the most docile and laid-back cat breeds, but they’re also known as Ragdoll cats since they resemble their namesake in that they go floppy in your arms. They’re very peaceful, and some of the calmest cat breeds exist. Ragdolls are caring and loving, making them wonderful lap cats, and will likely follow you about waiting for you to sit down so they can snuggle with you. They’ll play fetch and come when called, so they won’t just lounge on the sofa all day!

The Japanese Bobtails are a docile breed that is also known for its tranquility. This cat breed is from Japan, and the most distinguishing physical feature of the Japanese Bobtail is its bobbed tail. Elizabeth Freret, an Abyssinian breeder, first introduced them to the United States in 1968.

This is a medium-sized breed that is available in both long and short coats. Males are generally heavier than females, weighing between seven and ten pounds. Females weigh in at around five to seven pounds. This is a big cat breed, with distinct patterns and hues. They come in a variety of colors, including black, white, cream, red, and blue.

The Selkirk Rex is a relatively uncommon and quite recent cat breed that people often refer to as a cat in sheep’s clothing. They have curly, soft hair and a very calm disposition. Because they are extremely docile and chill, they love to be held and snuggled with. As a result, they’re wonderful with kids. Selkirk rex dogs are typically quite goofy and silly, although they aren’t hyperactive. They are extremely sociable, however, and would want to be with another pet if you leave home all day!