When you think of a cat, you very quickly think about the many coat hues and patterns that you have found in cats. However, there are several uncommon coat colors that you may not be aware of. When its hair is black, the black-cloured smoky coat is one of them, but the root of the hair is white. As a result, we refer to it as a “smoke” rather than a true black tabby cat.

If you are interested in learning more about these unique cats, today’s article will be very beneficial. 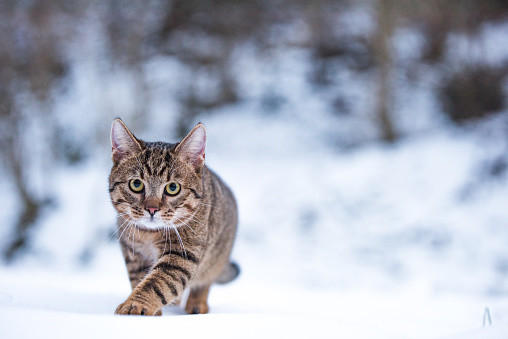 The history of the Black Smoke Cat is unknown. It’s thought that the black smoke cat was created through crossbreeding silver tabbies with black and blue cats.

The first smoke cats had green eyes. However, when the early generation of the smoke cats was crossed with black and blue in the late 1800s, and then the resultant offspring were produced, they had blue eyes.

However, in 1963 “All Pet Magazine” offered a hypothesis stating that—because of a change in the marking gene, instead of black marks on the top of a silver-white coat being produced, a solid black coat was produced over the white.

What Is Black Smoke Tabby Cat?

If you are questioned about the most frequent cat coat, we’ll say brown or black-tabby, depending on your location. It does matter where the cats are located. Some colors appear to be more common than others, according to some sources. Tabby cats are the most numerous because they are where the first cats come from. However, if he’s a black smoke tabby, things will be very different!

We assumed one of his parents owned a white undercoat. As a result, the cat was born to be smoke. However, this distinction is difficult to spot when compared to other solid-color kittens. We just know that these smoky cats have white hair around their eyes or a paler belly.

Some cat owners claim that determining which cats are smoke ones might take months or even years since their entire coat color isn’t visible at times. They only notice when their coat color reaches the age of two years. This means the undercoat will start to show up within three weeks, and they will have a splotched-color appearance from 6 to 8 weeks.

The silver in a black smoke tabby is supposed to be the most common allele (a variant form of a gene). This causes a pigment change, as well as an extension in the hair length.

How Is “Smoke” Created? 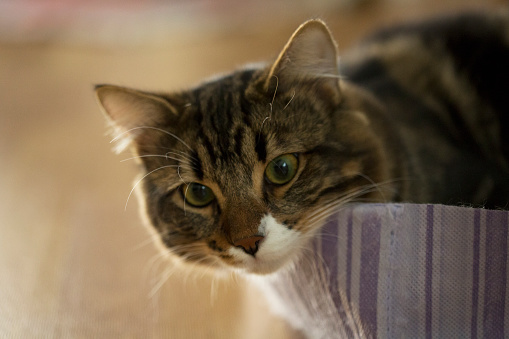 The combination of the dominant Inhibitor gene with the recessive non-agouti gene causes smoke. The term “agouti,” in genetics, implies that each hair shaft is colored differently. One particular strand of hair is likely to have two or more hues. As a result, your black smoke tabby has a coat with alternating light and dark bands.

The Inhibitor gene will release the pale undercoat. The amount of tipped color, known as the veiling, determines whether the smoke is light, medium, or dark. Furthermore, it is determined by how far the pale undercoat extends along the shaft of its hair.

The undercoat of most smoke cats is white to bluish-grey in color. Those with darker hues or narrower pale hairbands may appear self-colored. Smoke can also be light-colored, giving it the ability to resemble a shaded cat. These cats are tabby by nature, so they aren’t entirely uniform.

For example, a few smoke coats are thought of as overlaps, indicating that they will never have a silvery undercoat. When two dogs breed together, you can expect genetic smokes to appear. The standards that naturally define the ideal amount of veiling for a display-quality smoke will captivate cats. This change is due to modifier genes.

Smoke cats are uncommon, and many people are unaware of this: they have faint tabby markings. Young smoke kittens appear almost solid in the shade except for silver or clown lines where the agouti spots would show up in a tabby. It is likely that some of the clown lines will grow more obvious as your kitten gets older. Clown lines in adult cats, on the other hand, would be controlled.

There is not much research on the price and cost of a black smoke cat. Adult black smoke cats were formerly sold for between $650 and $10,000 in the past. On average, though, black smoke kittens cost between $350 and $4500.

Several people have told you that the Black Smoke coat is an uncommon hue among the overall cat population. It can be spotted randomly because each color must eventually show up in order for them to be bred into a cat breed. Take the Cornish Rex, for example. That short fur hides the patterns, which are considered uncommon and less frequent than the other ripples you see in the coat.

We can almost guarantee that you adore the unusual black smoke coat because it isn’t as popular as others. Because this smoking gene is dominant, the coat can not be passed or hidden by DNA. When white hides it, it is only inherited by one of its parents. The black smoke coat will not be the same as the dilute hues, such as cream or blue.

In addition, your black smoke tabby cat is said to have the ghost tabby’s markings, but they soon fade away when they become a year old. The adult coat will then come in at this age.

Keep in mind that no single gene works alone. Thousands of genes are responsible for each aspect of your kitten’s coat color, length, and texture, all at the same time. This is considered to be the most basic explanation of such an intriguing issue.

If you have ever seen or owned a black smoke tabby cat, you’ll be astonished by its unusual beauty. That is the pigment gene or dominant allele that gives rise to the hairs.