Scooping out cat litter from a box or a tray is always something that should be approached with caution, as cat waste can pose health threats if not done correctly. There are toxins in cat waste that can cause problems for all people especially pregnant women and their unborn child. Some cat litters are meant to neutralize the harmful things in the cat waste though most only take away the odor.

Though most people do not wear disposable gloves or a mask when scooping out cat litter they probably should do so. People should certainly prevent litter from touching their skin when emptying litter trays. Pregnant women need to be extra cautious when considering whether or not to scoop out or completely change cat litter from a tray. Indeed if someone else is able to scoop the litter instead then they should do so. The toxin Toxoplasmosis is the main risk found in cat waste.

Here is the lowdown on whether or not pregnant women should scoop cat litter, and what would it take to make it safer to do that.

Can I Scoop Cat Litter When Pregnant?

Pregnant women can scoop cat litter yet only if they take certain precautions to protect themselves. They should wear disposable gloves whenever they scoop cat litter or empty the entire tray. After they have finished with the litter the gloves need to be taken off and hands need to be washed thoroughly. If possible a pregnant should avoid touching her face while she is still wearing gloves.

Gloves need to be taken off as soon as the litter has been put in the trash, with hands been washed immediately afterward. Car litter is less of health risk of the tray is scooped each day as the toxins need 2 days to become infectious.

If there is somebody else who can scoop the litter every day instead of the pregnant woman then they should do so.

When Can I Scoop Cat Litter When Pregnant?

If pregnant women are going to scoop cat litter then they should do so on a daily basis, to lower the chances that the toxins inside the waste have become infectious. It is better to make sure that the cat litter is scooped each day, and maybe consider doing it at the same time to make sure that no days are missed out. Remember that disposable gloves should be worn at all times when scooping out cat litter.

The more frequently cat litter is scooped the better as the waste will have a lower chance of turning infectious.

Is There a Safe Way to Scoop Cat Litter when Pregnant?

There are water ways to scoop out cat litter when pregnant, such as making sure that disposable gloves are worn when the litter is being scooped out of the tray. This reduces the chances of cat litter coming into contact with the skin. Should cat litter touch the skin then that area needs to be washed immediately. Once the litter has been thrown into the trash the gloves should be thrown away and hands washed straight away. Hands should be washed for a minimum of 20 seconds making sure that in between fingers and the back of the hand.

The cat litter should be scooped each day to reduce the risk of toxins being infectious at the time that waste is being removed. Aside from the daily scoops, it is best to empty the tray at least once a week though somebody may be better doing the full litter tray change to keep the pregnant woman safer.

When scooping out cat litter pregnant women should consider hygiene more than they normally would, by using cat litter spray to disinfect the scoop after every single use. Spray should also be used to disinfect the tray whenever it is changed in full.

If pregnant women want to be even safer then they should consider other people scooping out the cat litter for them instead. That would make the risk non-existent.

Why Can’t You Scoop Cat Litter When Pregnant? 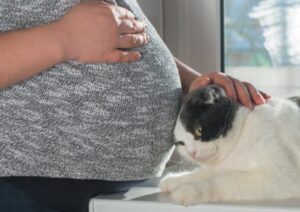 However, there is also advice that will reduce the risk of power to pregnant women if they have to scoop cat litter trays each day. Indeed scooping litter each day is the first piece of advice about reducing the risks. Daily scoops lower the risk as the waste is most likely to be infectious after 2 days.

Good hygiene standards will also lower the risk of pregnant women from scooping cat litter. Wearing disposable gloves is a must gloves should prevent waste from coming into direct contact with the skin. Gloves should only be taken off once the litter has been out in the trash. Scoops should be disinfected after each use.

Hands need to be washed thoroughly as soon as the gloves have been taken off, preferably with antibacterial soap or handwash. Avoid touching your eyes when wearing gloves, and wash any skin that has been in direct contact with either litter or cat waste.

Whenever possible pregnant women should avoid scooping cat litter to mean there is no risk of being infected by toxins. No contact means no risk at all.

When it is not practical for somebody else to deal with the cat litter then pregnant women need to protest themselves from the risk of infection. Measures to reduce risks include the wearing of disposable gloves and thoroughly washing their hands after scooping cat litter. If any bit of skin comes into contact with cat litter then it needs to be washed immediately.

It is better to scoop cat litter trays daily to lower the chance of the waste been infected with toxins.