If you have owned a cat for some time, you will already have noted that it retreats the litter box from time to time. But why is this the case, you may ask? And are there any inherent dangers or should you just ignore the behavior? What may be done to remedy the issue or menace?

In our discussions below entitled, why does my cat sit in the litter box, we endeavor to provide answers to the above and indeed many more pertinent questions. At the tail end of it all, we believe you will now be in the position to appreciate and care for your cats better. 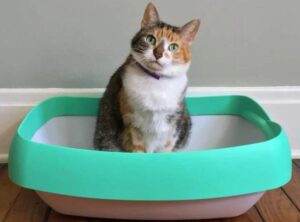 Cats and cat litter boxes go hand in hand. It is the cat litter box that collects the urine and the feces of the cat at the comfort of the indoor setting. The cat is ideally only supposed to visit the box if and when it needs to defecate or urinate. Any deviation from this norm signifies some deeper issues which we shall see shortly.

Why Does My Cat Keep Sitting in the Litter Box? 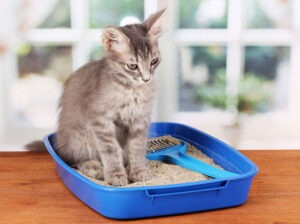 There are many reasons why this might be the case. These are:

Cats often retreat to faraway places as means and ways of dealing with stress. This often happens whenever they encounter or experience a stimulus that is threatening or disturbing. By retreating to the litter box, they get the privacy and the coolness they need to unwind and stay healthy.

Some cats have weird behaviors. They just like to spend some time alone without the company or the association of the others. Given that the litter boxes are located afar off, they provide the cats the tranquility they need to just relax and detach from the hustles and the bustles of busy schedules.

Just like any other animal, the cats also plan their technical maneuvers before executing them. Very few places accord the cats the space they need to plan this next move peacefully than the litter box. This is mainly because the box is often far detached from the mainstream.

Whenever the home experiences an influx of guests or strange people, the cat may never have the ability to cope with them. The situation is compounded if the said cat is naturally frightened and less able to mingle with strangers. In such a case, they prefer retreating to remote places where the litter box is situated.

A cat who is sick or has some inherent disorders may also opt for the litter boxes as a way of beating a retreat. The boxes, due to their detached locations and unpleasant environments, are generally less attractive. Fewer cats if any may usually want to get there, a fact that makes them quite ideal for retreats.

Is It Normal for a Cat to Sleep or Sit in the Litter Box? 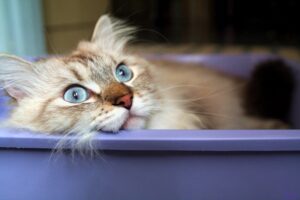 This behavior often signifies the existence of deeper issues that have to be dealt with. In case the issues are not tackled in time, the problems may often escalate to the extent of causing early deaths to the cats on the whole. You should not hence treat the symptoms lightly.

Can Hiding in the Litter Box Indicate a Medical Issue? 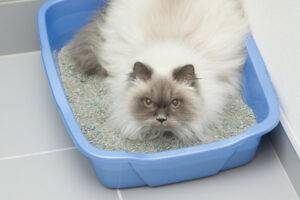 YES, it can! Below are the major medical issues that may be present in the cat:

The kidneys of the cats are the organs that filter out toxins from the blood to maintain the cats in a state that is healthy and great. Any impediments to the smooth working of the kidneys will usually lead the cat to be docile and lose the physical enthusiasm, enough to cause them to retreat to the litter box.

When cats are incapable of passing stool and other wastes freely, they often end up lacking the physical enthusiasm and higher levels of energy. If and when this happens, they may end up retreating to the litter box. Also, in doing that, they tend to get readier to pass the stool if the same arises.

Pandora’s Syndrome is a technical term for stress and other allied mental issues. The condition causes the cats to lose agility and interest in those activities that once caused them joy and extreme happiness. Cats who are affected by this condition often get to the litter boxes as a way of unwinding and rejuvenating.

When the urethra is obstructed, the bladder becomes less capable of holding the urine. The cats subsequently experience difficulties in passing the selfsame urine and hence become docile. They often get to the litter boxes as a way of passing time and recovering from the menace.

What Should I Do?

When confronted with these issues, you have a number of strategies for your attempt and implementations. These include:

Start out by playing more often with the cat. In the course of playing with it, you will make it to exercise and relieve stress at the same time. This way, you will make it less fearful and better placed to alleviate panic and other associated issues that may imperil its mental health.

You may also have to identify the stressors and remove them same. The stressors are the issues that give rise to the stress and the anxiety that subsequently comes along. Their identification may often require the use of trained technicians who have the necessary experiences and qualifications.

If after going through the above you still do not observe a notable change in the behavior of the cat, you may have to consult your veterinary. This is an institution that is equipped with the expertise and the drugs that may necessary to reverse the inherent medical issues that affect the cats.

There you have it! Our answer to the question, why does my cat sit in the litter box, has indeed served to furnish you with the in-depth details and inspiration you need to appreciate your cats better. Go ahead now to implement the insights as faithfully as may probably be the case.