Cats have an infinite variety of forms, sizes, and lengths. Did you know that the International Cat Association recognizes more than 70 distinct breeds? There’s plenty to go around for anybody thinking about acquiring a cat! You might be wondering which cat breeds have long legs are known for, so let’s take a look at the top 10 cats with the longest legs. Today we’ll look at the top ten cats with excessively long-legged cats. 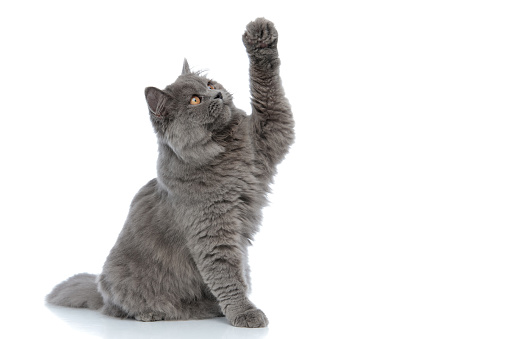 Savannah cats are a spotted cat breed that was developed in the 1980s. The genesis of this cat breed is rather fascinating: a housecat crossed with a medium-sized African wild cat resulted in the birth of a kitten in April 1986. The youngster was dubbed “Savannah,” and it is from this name that the breed takes its name as the long-legged cat.

The Savannah Cat is a medium-sized cat with long legs. In reality, while this cat is commonly considered medium-size, it has held the Guinness World Record since 2006 for the world’s tallest domestic cat. owing to its extremely lengthy legs, therefore it deserves to be on this list. Arcturus Aldebaran Powers is the cat  Savannah that is holding currently the title of Guinness World Record for the world’s biggest domestic cat, a 2-year-old Savannah Cat from Michigan.

The Chausie is yet another cat breed with long legs. Because it’s a cross between an Abyssinian and wild jungle cat breeds, the breed’s lengthy legs were passed down from the aforementioned Abyssinian. It was initially developed in the United States in the 1990s.

The Chausie is a very energetic, outgoing, and playful breed that requires a great deal of room and playtime. The Chausie, on the other hand, is not so. Because of its mix of wild jungle cats, they retain some of their wild tendencies and are thus unsuitable for children.

They do not get along well with humans, however, they do get along quite nicely with other pets, particularly dogs.

The Egyptian Mau has long, muscular hind legs. Their rear legs are longer than their front legs, and they can run swiftly thanks to a unique flap of skin on their flank and back knee. In reality, they are the most rapid domestic cat breed on the planet, with speeds over 30 miles per hour!

This is a big, long-legged breed that is extremely loving, lively, and energetic. It’s a very old breed dating back to ancient Egypt when it was used for duck hunting. They’re sensitive to the cold and don’t do well in chilly weather. Warm climates are more appealing to them.

Another fascinating aspect of this breed is that it is one of the few naturally occurring domestic cat breeds. It’s also a scarce breed, with only a small number of kittens being registered each year.

The Turkish Van is a medium-sized cat that originated in what is now Turkey but which has a long history before the country itself was founded. The name “Van” refers to this breed, which means they’re just colored on their tails and heads, with the rest of their bodies white.

They have lengthy, muscular legs. Their rear legs are somewhat longer than their front limbs, allowing them to run quickly.

Another fact about this breed that may be of interest to you is that they are both long and short-haired! They’re longhaired in the winter to keep them warm, but in the summer, they’re shorn so they don’t overdo it.

The Arabian Mau is a very old breed. They are desert cats from the Arabian Peninsula who live in the desert. These cats are a genuine breed, which means they did not originate through artificial selection. Female Arabian Maus are medium-sized, while males can be quite big. They have long legs with oval paws, a length (medium) tail that tapers towards the tips, and a round head adorned with oval-shaped eyes and big, well-set ears.

The Bengal breed was crossed with an Oriental shorthair to create the Serengeti. This breed is still in its early stages of development, but the ultimate objective is to produce a cat that resembles the wild Serval I mentioned previously without using any wild cats. The long-legged cat f the Serengeti make sense because breeders are aiming to produce a cat that resembles the Serval (which has the longest legs relative to its body of any cat) and therefore has long legs.

The Bengal is one of the world’s biggest cat breeds, and as you might expect, large cats have lengthy legs! Long-legged cats another breed is the Bengal are not the longest in relation to their overall size, but they are still very lengthy in absolute numbers.

Bengal cats are a result of crossing the Egyptian Mau with the wild Asian Leopard Cat. The goal of this unusual crossbreed was to develop a domestic cat with the appearance of a long-legged wildcat. According to the Bengal cat’s markings and stripes, they undoubtedly succeeded!

Have you heard of “Leggy Teddy?” Teddy, an Oriental Shorthair with very long legs, is a YouTube celebrity. After posting a video of his owner demonstrating Teddy’s insane length on Instagram, this cat became famous on the platform. Not every Oriental Shorthair is as fortunate in the leg area as Teddy, but on average, their legs are proportionately longer than their bodies.

The Abyssinian is not the world’s biggest cat, as many other breeds are larger, but when compared to its size, it has extremely long and slender legs. They reach a maximum length of 16 inches and weigh around 8 pounds when they mature. Their tail is also rather lengthy.

The Abyssinian is a popular cat breed that originated in Southeast Asia and is recognized for its beautiful appearance as well as being a very active, child-friendly, and intelligent breed with a long-legged cat. This cat is continually on the go and loves being the center of attention. You’ll never have a dull moment if you choose an Abyssinian as your next buddy. They’re also simple to groom because they have short hair.

Despite the fact that it is not a domestic cat and it is not advised to keep this wild animal in captivity, some people keep the Serval cat as an exotic pet. The serval must be included on this list since it has the greatest hind legs relative to the body size of any feline cousin. The African wild cat, also known as the sand cat or the bush cat, was discovered in 1776. This feline has large legs that enable it to leap up to nearly 7 feet into the air!