If you don’t have the time to keep a longhaired cat clean but want a pleasant, fluffy feline, a medium-hair breed is an excellent midway point. This medium hair kitten still needs to be groomed, but weekly brushing rather than daily brushing is sufficient as opposed to Persians’ frequent care.

Aside from being maintained, a medium-hair cat has an aesthetic that is both beautiful and distinctive. Last but not least, you’ll still receive the velvety soft, fluffy cuddle effect with a medium-hair cat, but without long hair strewn about on all of your surfaces. 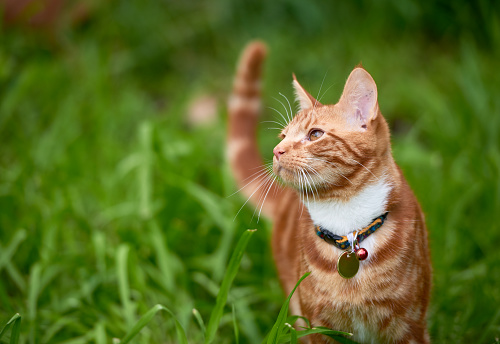 The Abyssinian is a cat that has a short to medium-length coat and is easy to care for. These cats are medium in size with big ears and a “ticked” coat, which means each hair has distinct colored bands. They’re low-maintenance and sociable with other pets, as well as love to spend time with their owners.

These are exquisite cats that only shed rarely and give a lot of love to people who care for them. They appear like wild cats yet are mild-mannered, allowing them to be strict indoor pets. They adore children, toys, and soft chairs to relax on when they need a nap. The American Bobtail is an active, hunting cat that may not get along well with reptiles or rodents in a home.

The Munchkin cat is a popular choice among cat fans everywhere. These cats have risen in popularity due to their tiny, cute legs and pleasant, kind behaviors. Many enjoy the Munchkin’s delicate, plush coat as well. The majority of them do have this feature, despite the fact that not all of them are medium-length-haired. A freak occurrence caused these marvels to be created—a stray gave birth to a litter of infants with short legs.

The American Shorthair is a laid-back breed that enjoys entertaining itself. This is a strong cast with a broad chest, muscular neck, and body, as well as thick, robust legs. With simple maintenance requirements and little human interaction necessary, these cats are easy to care for.

The long hair cat breed is characterized by loose curls that provide a high-end appearance without the expense of a beauty salon. LaPerm cats are friendly, curious, and affectionate, and will offer anybody who adopts them kindness, interest, and uniqueness. They can be born with any color or pattern combination.

Ragdoll cats are small-muzzled medium-furred felines with a cute, plush appearance. They not only resemble stuffed animals, but they also act like them. These cats are noted for their laid-back and kind dispositions. They have luxurious, silky fur that is delightful to stroke. Almost all Ragdoll cats are huge, weighing up to 20 pounds! They also have bright blue eyes that appeal to cat lovers and a stunning appearance.

The Balinese is a long, slender cat with a medium to long coat that is silky and straight and has darker tints on its paws, tail, and head. They are lively, active cats who like playing with their owners and other cats. While they can be quite independent at times, they will regularly seek comfort in their owner’s arms.

Chartreux cats are among the most popular long-haired cat breeds, with their gorgeous coats and playful personalities making them stand out from the crowd. They shed more than true short hairs and have a thicker and longer coat than other shorthair cats. Chartreux cats have sturdy, muscular bodies that help them in their everyday excitements.

The Birman is a big cat with unusual markings and a long body. Their coats are typically pointed and/or mitted in design, and their delicate coats come in a variety of colors. They also have deep-blue eyes. Birman cats are known to be particularly territorial, even if they only live with one owner. They prefer to keep to themselves but have been observed getting jealous if their owners do not pay them enough attention.

Cats resemble wild cats in almost every aspect but one: the Bengals are known for their lovely coats. When it comes to these gorgeous house cats, there’s nothing to be concerned about. The Bengal cat is the product of mating an Asian Leopard cat with an American Domestic cat. They have distinct markings and a rich orange color, which helps to distinguish them.

The Cyprus cat is a breed of cat with a thick, medium-to-long hair coat. The breed was bred in Cyprus, where they adapted to the cooler, mountainous areas. These cats are skilled hunters and have captured big animals including rats, big lizards, and even snakes as prey.

These snow sweethearts are a joy to look at. The gorgeous Turkish Angora has a downy, soft white coat (except when they may occasionally be seen in other hues.) These cats are generally quite thin and delicate in appearance. The Angora cat is typically a calm, pleasant cat, but they can be sensitive to changes. As a result of this, the breed may become highly anxious when things in their daily routine change or after being rehomed.

The Egyptian Mau is one of the few naturally spotted domesticated cat breeds. The Egyptian Mau has markings that appear only on the very tips of its fur, and they have a muscular physique and shorter front legs comparable to those of wildcats. The long, black dorsal stripe that runs the length of their spine is one of the breed’s most distinctive features. These cats are one of the fastest domestic breeds, capable of speeds up to 30 mph.

The Havana Brown cat is a cross between the Siamese and Domestic cats. This cat is quiet, self-reliant, and inquisitive, but it also interacts when the situation demands it. On a rainy day, they can stay huddled up in a nap position, but when the time arises, they will happily spend time playing and interacting with family members.

The Exotic Shorthair is a longhaired version of the fluffy Persian, sharing many characteristics with Persians. They have a flat nose and face and are kind and docile in disposition. These cats are very loving and show more love and affection for people than other breeds, and they dislike being left alone.

The Somali cat has a number of characteristics that make it stand out. For one, their coats are quite distinctive, with shorter tops and longer underbellies. They’re technically long-haired cats, but they have a nice mix of length in their hair, making them more medium-length on average. Somali is noted for being mischievous and daring, with a propensity to get into everything they can.

The Manx cat is notable for its stubby tail, which is often described as “non-existent.” The breed originated on the Isle of Man, and along with a genetic defect that results in their distinctive stubby tail, they are known for their small front legs, rounded skull, and soft, thick double-layered coat. They are sociable cats that become attached to their masters and frequently follow them about like puppies.

The Ocicat resembles a wildcat, yet it has no such ancestry. They have the appearance of a domestic cat, except for their coat colors and markings, which are generally composed of contrasting spots. The larger-than-life, muscular cats have a big head that is longer than it is broad. Despite their appearance, they are sociable, pleasant, and even-tempered felines.

The Scottish Fold’s appearance is due to a genetic defect that inhibits the proper formation of cartilage, which causes their ears to be small and bent over. Before evolving into Scottish Folds, they were known as “Lops” or “Lop Ears.” Unfortunately, the change affects the entire body, which might lead to additional health concerns as time goes on, especially in older cats.

The Ragamuffin cat is a sort of Ragdoll, but with a unique feature. They may have medium-length fur, although it’s very thick and frequently likened to rabbit fur. These cats are therefore able to withstand even the most severe cold temperatures. Ragamuffin Cats are typically sociable. Males in particular tend to be very friendly. They’re laid-back and easygoing, and they warm up to just about everybody. This is a great breed to consider if you’re searching for a cat that can adapt easily to new situations.