Cat Sleeping Body Language – What Do They Tell?

Below is the description of the meaning behind different cat positions:

The second position is when a cat stretches out on its back with its legs in the air. This position is often seen in cats who are feeling comfortable and safe. When a cat takes this position, it’s as if they are saying “I’m not a threat, please don’t hurt me.”

This is the position that most cats take while they sleep. It’s also a very vulnerable position, so it can be seen as a sign of trust in you and your home.

It may not seem like this on the surface, but this is actually one of the more aggressive sleeping positions that cats can take. When cats stretch out on their back and expose their bellies, they are making themselves as vulnerable as possible.

This is a sign that they are ready to fight or take flight if needed. If you see your cat in this position, it could mean that they feel threatened by something in the environment and are preparing for battle.

This position is an extremely vulnerable one for a cat, so when you see this it can mean that they are either feeling very safe or threatened. If your cat trusts you enough to expose their belly while sleeping, then it’s likely because they feel comfortable and safe in your home. However, if they do not trust you at all, it could be a sign that they are preparing to defend themselves if needed.

Tucking Their Legs In

The third position that cats can sleep in is when they tuck their legs in. This position is often seen as a sign of vulnerability or insecurity. When a cat sleeps in this position, it could mean that the cat feels unsafe and is looking for security. Another possibility is that the cat may be cold, and by tucking its legs in, it is trying to keep warm.

There are certain things you can look for to determine why your cat is sleeping in this position. If your cat has recently been adopted or is new to your home, it may be feeling insecure and vulnerable. If the cat always sleeps in this position, it could be a sign that the cat doesn’t feel safe or secure in its environment.

Another possibility is that the cat is sick or injured, and is using this position to make itself more comfortable. If your cat has been sleeping in this position for a while, it’s a good idea to take it to the vet to rule out any health problems.

Napping With One Paw In the Air 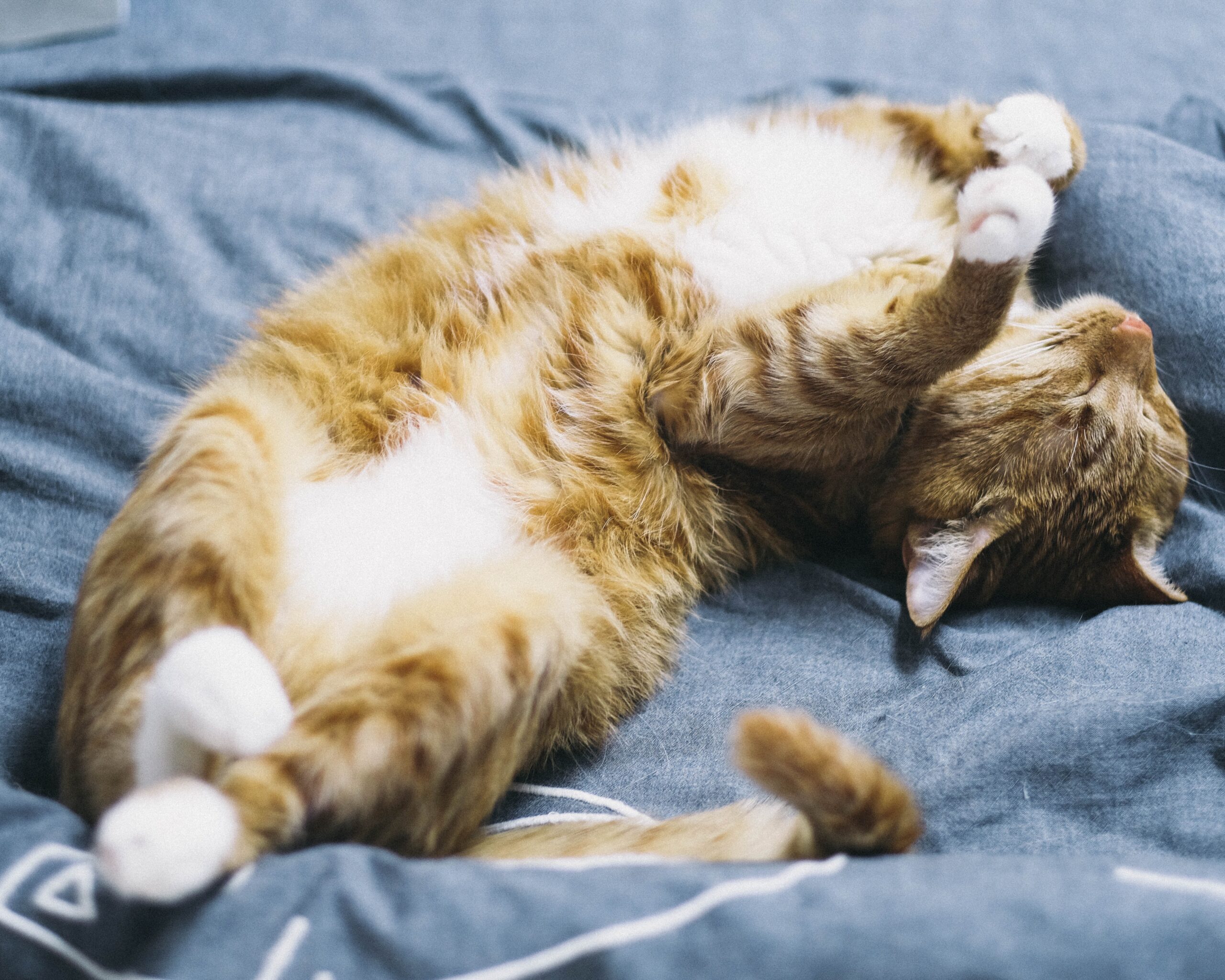 The fourth position that cats can sleep in is when they nap with one paw in the air. This position is often seen as a sign of confidence and dominance. When a cat sleeps in this position, it usually means that the cat feels safe and comfortable. Another possibility is that the cat is trying to show dominance over its environment.

Another interesting read: Cat Teeth Grinding: Cause And Solutions

When a cat has one paw in the air, it usually means that the cat is feeling confident and comfortable. It might also be a sign of dominance over its environment. One thing is for sure though: cats love to sleep with one paw in the air!

Sleeping On Their Side

When cats sleep on their side, it usually means they’re feeling safe and secure. This position allows them to keep an eye on their surroundings while still being able to quickly react if needed. If your cat sleeps in this position often, it probably trusts you and feels comfortable around you.

In this position, cats can also be used as a way to keep themselves warm. Their bellies are exposed, so heat is lost more quickly than if they were in another position. This is because their fur is designed for warmth and protection from predators rather than insulation from extreme temperatures.

If you notice that your cat often sleeps on its side or belly when it’s cold outside then try moving the litter box closer to where they like to lie down. This will help keep them warm while also giving them access to a place they can use as a toilet when needed (which means less mess for you!).

If your cat sleeps in this position often, it probably trusts you and feels comfortable around you.

In this position, cats can also be used as a way to keep themselves warm.

When cats have to sleep in public areas, they like to hide underneath something. This could be a chair, table or another place where they feel safe and comfortable. They might also choose this type of sleeping position if it is cold outside and the sofa is warm. If you find your cat sleeping under something then know that she feels protected and safe.

It is in line with a cat’s natural inclinations. Predators are more likely to pass by an animal if they can’t see it. Cats feel safer when they cannot be seen, so sleeping under something is the perfect way to achieve this. Additionally, cats like small and dark places – which is why you might find them hiding in boxes or suitcases. When a cat feels safe and protected, she will sleep deeper and longer.

If you are worried about your cat feeling safe there is a way to create the perfect sleeping environment for her. Choose an area where she can see out of, but it is also private as well.

A good example would be a bed by the window or somewhere in the corner of a room with plenty of places to hide. Make sure the area is free from other animals and that it is comfortable for her to sleep in. With a safe place to rest, your cat will be able to get a good night’s sleep.

Sleeping On Top Of Something 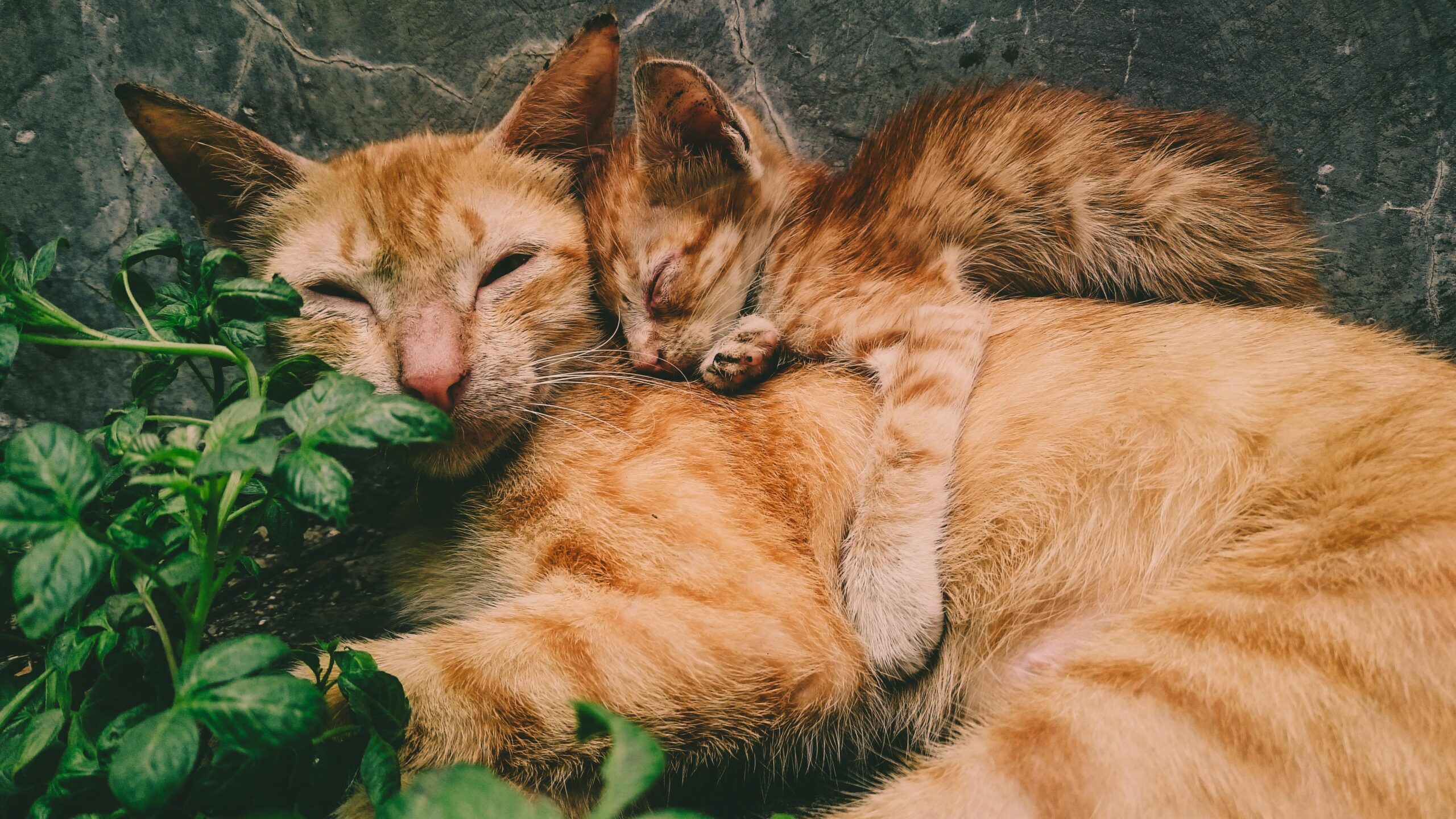 Another common sleeping position for cats is when they are on top of something. This could be a piece of furniture, a human, another animal, or even another cat. When cats sleep on top of something, it generally means that they feel safe and secure in that location.

Sleeping with One Eye Open

This sleeping position is often seen in cats who are cautious of their surroundings. When a cat sleeps with one eye open, it is constantly scanning its environment for any possible threats. If your cat has this habit, then you may have noticed it always sleeps in the same spot where it can keep an eye on everything that goes around.

Another interesting read: How to Slow Down Cat Eating?

Sleeping with one eye open is a position of vigilance, so if you see your cat sleeping like this, don’t disturb them unless absolutely necessary. Just let them sleep and get their rest for as long as they can.

Cats are complicated creatures and their body language can be difficult to interpret at times. However, by being aware of the most common meanings behind a cat’s sleeping posture, you’ll be better equipped to handle any situation that may arise.

Have you ever encountered a situation where you weren’t sure what your cat was trying to tell you? Share your story in the comments below!