After keeping a lovely cat, you should decide on the kind of material to use for your cat. To come to a conclusion on cat litter you need to differentiate between clumping and non-clumping materials.

In this article, we are going to take a look at the pros and cons of both clumping and non-clumping cat litter. When you may need either of these cat litters and how often you are supposed to change them. Also, we will tackle factors in which the two cat litters differ and the best choice in each case for your cat. 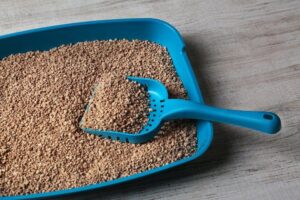 What is Clumping Litter?

Clumping litter is materials made in a way that you can remove cat feces and urine without having to empty the entire cat box. These materials enable the litter to absorb liquid or urine and form a hard solid clump. 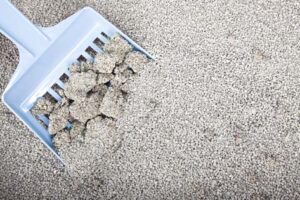 Although clumping litter is not that cheap you may end up spending less because you can use it for a longer period before dumping it out entirely.

This kind is formed containing bentonite clay which absorbs urine and forms a very nice solid clump. The solid clump is easier to scoop out leaving the place tidy.

Clumping materials perfectly contain smells of cat feces and urine. To ensure no nasty smell or is at a minimum, always add fresh litter after cleaning. With this, your home will remain fresh every time.

The clumping materials contain clumping clay which assists in absorbing cat poop and urine. The formation of clumps makes it easier to remove the hardened clumps, hence, controlling room odors.

This material has a high capacity for soaking any kind of moisture. In comparison with any other form of litter, clumping litter is very cheap in terms of maintenance. 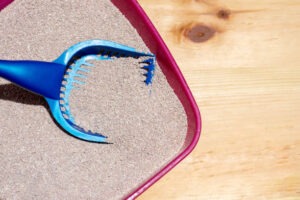 If a cat accidentally ingests the clumping litter it will develop some blockage issues such as gastrointestinal upset.

Kittens are not recommended for clumping litter. They can eat the litter which contains sodium bentonite leading to different body problems like intestinal blockage as this litter component expands due to moisture. You can use clumping litter once your cat is about 4 months old.

Clumping litter is not eco-friendly in any way. They are direct from stripe mine and have different impacts on the environment.

Discarding these litters will take more space in your landfills as it expands when wet.

Bentonite clay is very heavy to carry and dusty too.

When Do You Need Clumping Litter? 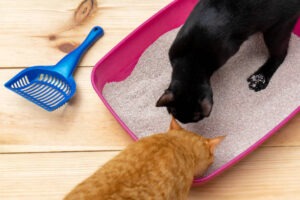 The need to use clumping litter depends on the age of your cat. Although it forms hard balls once it absorbs liquid making it easy to scoop out the waste, it is not suitable for kitten use. You are supposed to wait until your kitten is at the age of 4 months. This is to avoid ingestion of the waste causing intestinal and gastrointestinal upsets.

How Often Should You Change Clumping Cat Litter? 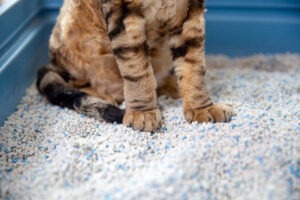 You are supposed to scoop out the cat’s feces on a daily basis. The number of your cats depends on how often to do so. Based on general guidelines you can replace the clumping litter twice a week. However, depending on your cats you can do it once a week or daily.

If you always clean your litter box daily, then you can change clumping litter after 2 to 3 weeks. Once you change the litter, use a dish detergent when scrubbing the box to remove odors.

What is Non-Clumping Litter? 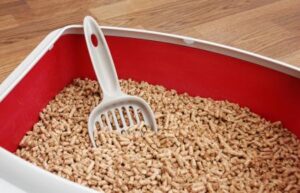 Non-clumping litter is materials that can get rid of odors by absorbing a large amount of urine without forming clumps. Some of these litters are non-scented while others contain additives like charcoal or baking soda meant for controlling nasty smells.

After saturation, the urine starts to drip off the litter box. Therefore, any need to clean it means replacing it entirely. No clumping litters are made of different materials such as clay or plants like corns, pine, and wheat. 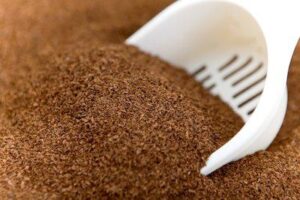 Most people with kittens prefer the use of non-clumping litter because it doesn’t risk your cat’s potential health problems from clump litters.

You only need to replace non-clumping litters once a week fully.

Most of these litters emit fewer clouds of dust as they contain charcoal and baking soda to absorb bad smells. Also, contains perfume deodorizers for the same.

This litter is generally inexpensive making it common in cat litter boxes. The materials used such as corn and wheat are easier to find. 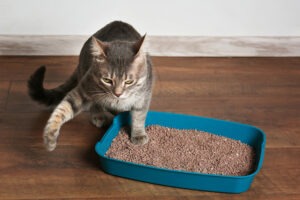 Despite being highly odor absorbing, failure to replace non-clumping litter regularly will lead to strong odors after a few days. It can’t contain odors for long.

Before putting it into the garbage you are required to bag it.

These litters need to be replaced more often. You are supposed to change the litter once a week. This makes this kind of litter expensive to use.

In most cases, non-clumping litter allows the cat urine to drip from the box bottom on saturation. This makes the box difficult to clean and you need to dump out all litter more often.

Non-clumping litter also contains clay which takes more room when disposed of in landfills. This is environmentally unfriendly in all ways.

When Do You Need Non-clumping Litter?

Unlike clumping litter, you can use non-clumping litter any time. These materials are cats friendly and contain fewer or no blockage problems. You need to use it, especially when your kittens are below 4 months old.

How Often Should You Change Non-clumping Cat Litter? 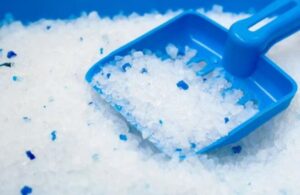 The non-clumping litter contains clay that doesn’t have the absorbent capacity. Therefore, a cat’s urine tends to settle at the bottom of the litter box and sometimes pools out. Also, these litters can’t contain odors for a long period hence, if not replaced sooner it will smell.

Therefore, you need to replace it entirely more often. Replacement can be done once a week if you can’t manage more frequently. You just scoop out about 2 to 3 inches of non-clumping litter daily.

What is the Difference Between Clumping and Non-clumping Litter? 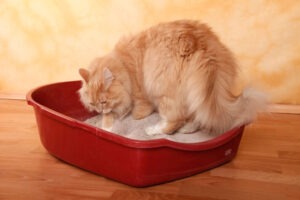 Knowing the differences between clumping and non-clumping litter will help you in determining which one is the best to use for your cats. Below is a discussion on how these litters perform by the following; dust control, tracking, absorbency, scooping, and more.

Clumping litter: it is primarily made of sodium bentonite which enables clumping on moisture exposure. Other clumping cat litters are corns, wheat, tofu, and wood. They are clumping and eco-friendly, unlike clay ingredients which take large spaces on landfills.

Non-clumping litter: is made of calcium bentonite which is a non-clumping clay even when wet. Nowadays there are biodegradable materials that are plant-based like wheat, recycled papers, beet pulp, and more. These materials are made into larger pellets that can’t clump when wet.

The difference highly depends on the properties of its composition as well as structure.

Clumping litter: deodorize cat’s waste and litter through clumping action. It makes it possible as all moisture and its smell are locked in clump making.

Non-clumping litter: for non-clumping litter to absorb odors it relies on the absorbent properties of ingredients used in its composition. Some are added activated charcoal as an odor-controlling ingredient. Fragrances can be added to cover unpleasant smells.

In this factor, clumping kind is the best as it clumps waste effectively for odor control. Non-clumping litter absorbs odor but on saturation, it smells.

This aspect is closely related to that of odor control. The type with high absorbent capacity effectively manages odor control.

Clumping litter: on exposure to urine or any kind of liquid, clumping litter forms a hardball very quickly. All liquid waste is locked in leaving the area dry and tidy.

Disintegrated litter particles contain dust which can lead to breathing problems for you and your cat. Always checks the manufacturer’s details to see if the litter type is 99 to 100 percent dust-free. The two types of litter contain dust particles at a different percentage.

Clumping litter: it is composed of smaller particles to enhance clumping action but they are dustier.

Here, you can choose non-clumping litter as it’s capable of controlling dust due to large-sized particles.

Litter tracking is pieces of litter on the floor or cat marks as a result of stuck litter particles on the cat’s paws. The more sticking the type of litter the more tracking it could be.

Clumping litter: it contains tiny particles that easily track. They stick on the cat’s paws and they are tracked easily on the floor as the cat moves around the house.

Non-clumping litter: since these litter particles are non-sticky they are less tracking as they cant stick on the cat’s paws.

In terms of tracking, non-clumping litter is the best due to its big anti-tracking properties.

You can complete your daily litter box cleaning once the soiled litter is easier to scoop.

Clumping litter: it is more efficient and easier to clean a litter box with clumping litter. This is because;

Non-clumping litter: these litters you can’t scoop as particles don’t stick or clump. On saturation, urine will be pooled on the floor leading to nasty cleaning. Since this litter is not scoopable you end up replacing it more frequently.

When it comes to the easiest type to scoop, the clumping litter type is the best choice.

1. Why Does my Clumping Cat Litter Not Clump?

2. Is Clumping Litter Bad for Cats?

Generally, cats need a litter that is unscented and can clump naturally. In this case, clumping litter is good for your cat.

However, some clumping litters like corn tend to accelerate mold growth. Contains tiny particles that cause cats respiratory problems.

Due to blockages such as intestinal issues, clumping litter isn’t good for kittens below 4 months of age.