Are you interested in a cuddly Ragdoll or a lively Abyssinian? Cat fanciers have been choosing and breeding cats with certain characteristics and features since they were discovered. Here are the top 20 most playful cat breeds of all time if you’re searching for an amusing cat that will add lots of joy to your life! 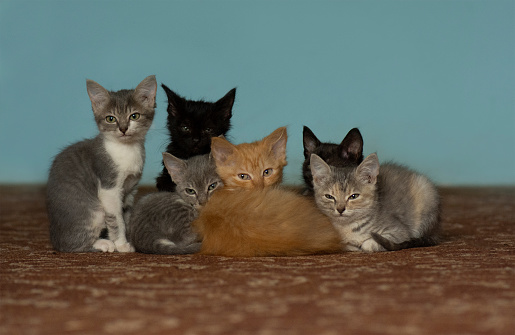 Abyssinian cats with a high level of intellect are the most common among these pets. They’re also some of the most outgoing felines, enjoying their downtime. In fact, if they don’t receive adequate playtime and attention from their owners, these cats are said to become depressed. The bond they have with their owners has been labeled “dog-like,” in stark contrast to the rest of cats’ disposition, which appears to merely tolerate human companionship rather than welcome it. They’re certainly one of the most exuberant cat breeds around!

The Siamese cat is an excellent place to start when it comes to funny cats since this breed’s pleasant disposition has been with us for millennia. The majority of these cats have a ColorPoint pattern to their fur, which means they have color on their faces, tails, and legs, but the fur on their backs and bellies is frequently white due to a type of albinism that is hereditary. These cats are thin, muscular, and nimble, so they like playing games in which they may scale and pursue.

The Japanese Bobtail is often regarded as one of the most lively cat breeds. This is due to its pleasant, loving, and quiet nature, as well as its playful and energetic spirit. Japanese Bobtails are recognized for their love of fetching, sprinting, and leaping. If you’re looking for a cat that’ll enjoy playing fetch or soccer with you, the Bobtail could be the one!

The Balinese is a beautiful cat with a fun personality. They resemble Siamese cats, with who they are closely related. The Balinese is a muscular, lean, and lengthy feline. They have many characteristics in common with the Siamese, their close relatives. The Balinese are very talkative and desire to tell you all about it. They’re also amusing to observe, constantly engaging in some manner of hilarious escapades. They want to play all of the time, and they enjoy games like fetch.

The Cornish Rex is a one-of-a-kind cat with virtually no hair. Its body is covered in a fine down that comes in a variety of colors and designs. This breed is known for its joviality, as it prefers to be active to keep warm. These cats like to sleep on your lap and nestle in bed with you as you sleep. These cats enjoy chasing games, so it’s a wonderful choice if you have kids.

A Bengal is not the right choice if you’re looking for a snuggly cat that will purr and cuddle with you all day. Despite their amicable dispositions, Miniature Leopards are very energetic and active, nimble, clever, and always on the go. Don’t count on this cat to purr near your feet for long, as a Bengal is bound to provide an unusual and thrilling trip!

The Birman is an exceedingly playful and enjoyable cat breed. Although the Birman isn’t as outgoing as other breeds on this list, it does enjoy playing! Instead, it indicates that the cat would prefer to play with just one individual; its owner. These cats are very attached to their owners, but they don’t seem too interested in strangers.

The Turkish Angora is a popular choice among houses with children. This lively cat has lengthy locks that are soft and cuddly. It loves its human owners’ attention and is typically quite calm, so it isn’t easily frightened off by strangers or rambunctious toddlers. It’s usually one of four hues, including black, blue, red, and cream, combined with white, and it enjoys playing with crumpled-up paper and catnip-filled toys.

The Maine Coon is one of the biggest cat breeds, weighing approximately 20 pounds. They are docile, pleasant, and highly intelligent. Their amiable moniker “the gentle giant” was given to them due to such an unusual combination of features. They’re fast learners, and many of them learn several commands. They walk on a leash and are known to be one of the few “water-loving cats.”

The Burmese cat is a breed of domestic cat native to Burma, near the Thai Ocean. They are completely round cats with a circular head, face, eyes, chin, and toes. Burmese cats tend to become calmer and just observe the activities as they get older. However, younger Burmese cats are extremely inquisitive and energetic, so you will find that they want to play all of the time.

The Selkirk Rex is a beautiful breed that may have a messy appearance, with mottled or smokey-colored hair, despite the fact that it comes in a variety of colors and patterns. These cats are well-liked and friendly, and they get along with other pets if left alone. They tend to live about 15 years and suffer from relatively few health concerns. If you have them, this cat will enjoy chasing the laser pen and will frequently run up and downstairs.

These are tiny, spry cats that are renowned for their tiny bodies and short legs. These cats are brave, confident, and sharp-minded. They will examine every corner and win everyone’s affection. Munchkins are sociable, kindhearted, and playful. They have a never-ending appetite for new games and mischief, which is why they’ll always be on the go. They get along well with other pets and children.

Burmillas are a relatively recent breed that has only recently been developed. They are still an experimental breed and have not been accepted by all major registries. They require little maintenance, but they have affectionate and loving personalities that make them instantly lovable. Burmillas are usually peaceful, sluggish cats, with the exception of when it’s time to play. When that happens, you’ll see your Burmilla come alive, and you’ll witness their personalities in full bloom.

The Havana Brown cat is a medium-sized feline with no white on its belly and is often black or brown in color. These cats have huge ears and can appear fierce as kittens or adults. They are likely to stay a kitten for a little longer than other breeds, owing to their slower growth rate, and they have a lot of energy and desire to play.

The Manx is a cat breed from the Isle of Man that has a naturally occurring variation that shortens its tail. Many Manx cats have little stubs of tails or are tailless. The Manx is a small, short-haired, white cat. They come in many colors and patterns and can be both long-haired and short-haired. They are said to be sociable, docile, and active. The Manx is usually quite attached to people but may be reserved in the presence of strangers.

The Colorpoint Shorthair Cat is a loving, loyal, and dedicated companion to his or her owner. They’re a talkative breed that wants to tell you everything they’re thinking. These cats are very clever, and they can pick up new games like fetch quickly. Colorpoint Shorthairs are one of the most energetic cat breeds around, and they will be demanding about their desire to play once they learn this game.

The Sphynx is a breed that doesn’t have any hair and may or may not have whiskers. These felines might appear fierce, but they are actually quite amiable and will stay on your lap or in your arms as long as they are seeking heat. Cats with no whiskers enjoy batting around catnip toys and paper balls, which may explain why they don’t run much.

The Siberian cat, the Russian national animal, is regarded to be an ancient cat that gave rise to all subsequent long-haired cats. They are sociable, brave, and powerful yet nonetheless calm and loving.

The Tonkinese cat is the offspring of a Siamese cat and a Burmese. Tonkinese cats, like their parents, are extremely joyful and pleasant to be around, making them ideal pets. These cats are exceptionally clever and people-focused in nature. They’re also very interested and inquisitive, taking an interest in everything around them. However, they are a high-energy cat breed with a short attention span, especially when left alone.

The Turkish van is yet another breed with a distinctive coat only seen in Turkish cats. The van pattern gives an entirely white body with just a little paint on the head and tail. This cat is a beautiful breed with striking markings, perfect for people who have a passion for cats. Many of the cats like to lay on their backs and wait for you to pet their stomachs. It also enjoys playing with the laser pen and will join in nice games with other cats if they allow it.