The Golden British shorthair cat is one of the oldest known cat breeds, having been introduced to Britain by the Romans. British shorthairs have plump, plush bodies and rounded forms that could almost be mistaken for teddy bears.

The shorthair British is one of the most well-known cat breeds in the world. The term “British shorthair” is entirely appropriate, since not only do they have a thick, plush short coat, but they also have a kind yet no-nonsense—that is, rather British—perspective on life. The British shorthair is a wonderful family cat that likes being with its owners, but it may become irritated if held or cuddled for too long.

The typical British shorthair is covered in blue fur, which is one of the breed’s most distinguishing features. The finest part: This medium-to-large cat has few health issues, despite its wide variation in colors and patterns. 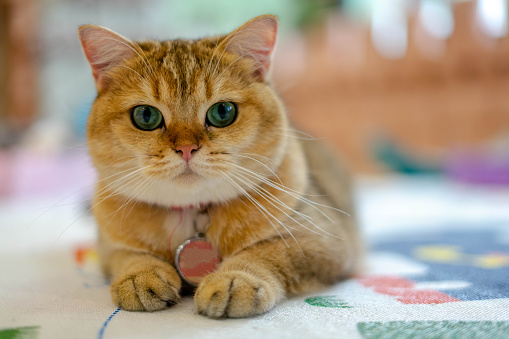 British shorthairs are a long-established breed that is thought to be descended from the Roman cats brought to England by the conquering Romans, as stated by The Governing Council of the Cat Fancy. They were employed for vermin control and spread quickly throughout the country as both street and farm cats. Soon, their calm and self-assured natures prompted others to accept them into their homes (and onto their laps). They have round faces with short, dense coats of all hues over the years, according to The Cat Fanciers’ Association.

The British shorthair we know today evolved out of a polyvalent breed of cat that was developed in the early 1900s. Persian, Russian blue, French Chartreux, and domestic shorthair cats were added to the mix during World War I. In the 1970s, the British shorthair was formally recognized across the world.

One golden color is classified as “Shaded Golden” and characterized as follows in the Cat Fanciers’ Association (CFA) breed standard for the British Shorthair: The undercoat is a rich, warm cream hue with a black/dark brown tipping on the mantle. On the back, flanks, head, ears, and tail, there should be color in the coat. The important aspect is the even distribution of the tips, rather than the degree of tipping. The legs should exhibit a tipping gradient that slopes down to the paws; however, this should be as consistent as possible. The hue of the chin, stomach, chest, and under tail is a pale apricot. Nose leather: brick red may be outlined in black/brown. Paw pads: black/dark brown. Eye color: green or blue-green.

Another golden hue, which is also known as “Chinchilla Golden,” is: “The undercoat is pale honey to brilliant apricot. The coat on the back, flanks, head, and tail are sufficiently tipped with black to give it a golden sheen. Tipping on legs and extremities of tails may be used to create a gradation of color. The neck, ears, stomach, and chest are all diluted in color, considerably lighter than the undercoat tone. Due to less tipping, the overall effect is lighter than a shaded golden. Face: black outlines the rims of eyes, lips, and nose. Pink nose leather. Paw pads: black. Eye color is green or blue-green.”

A British Shorthair is a large, healthy breed that may live up to 20 years. However, like all breeds, they are susceptible to certain illnesses.

Hypertrophic cardiomyopathy is a heart disease in British shorthairs that causes thickening of the muscular walls of the cat’s heart, resulting in breathing difficulties, lethargy, and loss of appetite. Urinary tract and kidney problems are also common among this breed.

To avoid developing health issues, begin by obtaining a shorthair British kitten from a renowned breeder who uses healthy adults. Once a year, take your cat to the veterinarian for a checkup.

Regular health visits should be standard procedure for all British shorthairs, and exercise should play a significant part in their lives. These cats have energy but are not very active, so they can become overweight (particularly as they get older) unless you figure out methods to keep them active when they’re young. Interactive toys, fishing wands, balls, lasers, and climbing equipment like cat trees and cat shelves will all keep your British shorthair active and healthy physically and intellectually. 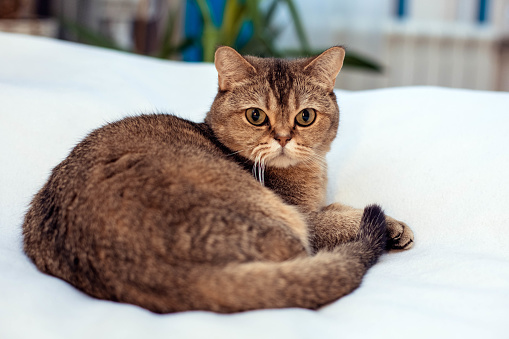 British shorthairs have a reputation for being difficult to train because they’re active, affectionate, and intelligent, yet they don’t feel the need to demonstrate off by figuring out how to open your refrigerator. They are quite difficult to beat when it comes to temperament. The English longhair cat is friendly and will treat everyone in the family (including dogs and other cats) like a buddy, especially if trained as kittens.

This is a top-rated cat breed, according to Marilyn Krieger, a certified cat behavior counselor in San Francisco. “They are kind, laid-back, and trustworthy partners,” she adds.

British shorthairs don’t require special attention to look attractive, as long-haired cats do. Their tiny, soft, fluffy coat only requires a weekly brush to remove dead hair and skin cells. They generally do an excellent job of keeping themselves clean and tidy.

British shorthairs, like other kinds, need to have their nails trimmed and teeth cleaned on a regular basis. They also require frequent veterinary visits. Spay or neuter your pet and keep their vaccines up to date as directed by your veterinarian. Check their ears for wax buildup or possible ear mites on a regular basis. It’s also vital to maintain the cleanliness of their litter boxes so that they don’t reject them.

British shorthairs, like most cats, aren’t picky about where they live—as long as they have caring owners who spend time with them. British shorthairs are a happy medium that is both lively and content to snooze in the sun all day. You don’t have to worry about him causing you any problems when you’re at work because he is always up for a game of chase-the-little-red-laser-beam (especially if you provide him with lots of toys for fun).

When deciding on the right size litter box for your British shorthair cat, make sure to purchase at least two large litter pans to accommodate comfortably him when he’s fully grown. When picking a litter box, keep this rule in mind: It should be as long as your cat is from his nose to the base of his tail and half as wide.