What Is The Actual Count Of Cat Toes?

Even if you own the cutest face on the planet, your cat toes are still one of its most appealing features.

The tiny colored paw pads, the way they reach into claws, and the incredible range of purposes these toes perform… All of these features make your cat’s toes essential components for its continued existence.

The sweetness factor is just a bonus, as well.

If you’ve taken the time to examine your dog’s paws carefully, you may notice something else that’s rather intriguing.

Unlike people, cats don’t have the same number of toes on their front and rear legs.

Are you perplexed as to why? You’re not the first person to wonder about it. Every day, numerous pet parents ask themselves a slew of questions regarding their cats’ toes and paws.

I’ll answer some of the most frequently asked questions and provide you with some fascinating cat toe and paw facts today.

So, What Is The Actual Count Of Toes In Cats?

The average cat has 18 toes. They have 5 on each front paw and 4 on each rear paw. However, this is not always the case. A single feline may have more…or even fewer!

Don’t be concerned if your pet has more or fewer toes than expected. It’s a frequent occurrence, and most of the time it’s completely safe.

Why do cats have significantly more toes on their front paws than their rear paws?

The solution is straightforward.

The extra toe on their front paws comes in handy at this point.

What If My Cat Has More Than 18 Toes?

That’s okay. It simply indicates that your pet is a Hemingway cat, which is also known as a polydactyl cat.

Humans, other primates, and also various mammal species are all susceptible to polydactyly.

Polydactyly is a common birth defect in cats. The colossal Maine Coon or its relative the Manx are two examples of feline breeds that are known for having this condition.

Polydactyl cats can have up to four or five toes on one or more of their paws. The condition generally affects the front paws, but it may also affect the hind ones.

Jake, a cat, currently holds the Guinness World Record for polydactyly in cats. Jake amazed everyone with his incredible 28 toes.

Facts About Cat Paws And Toes

Do you want to learn more about your cherished pet?

Here are some fascinating cat paw and toe facts that could surprise you. 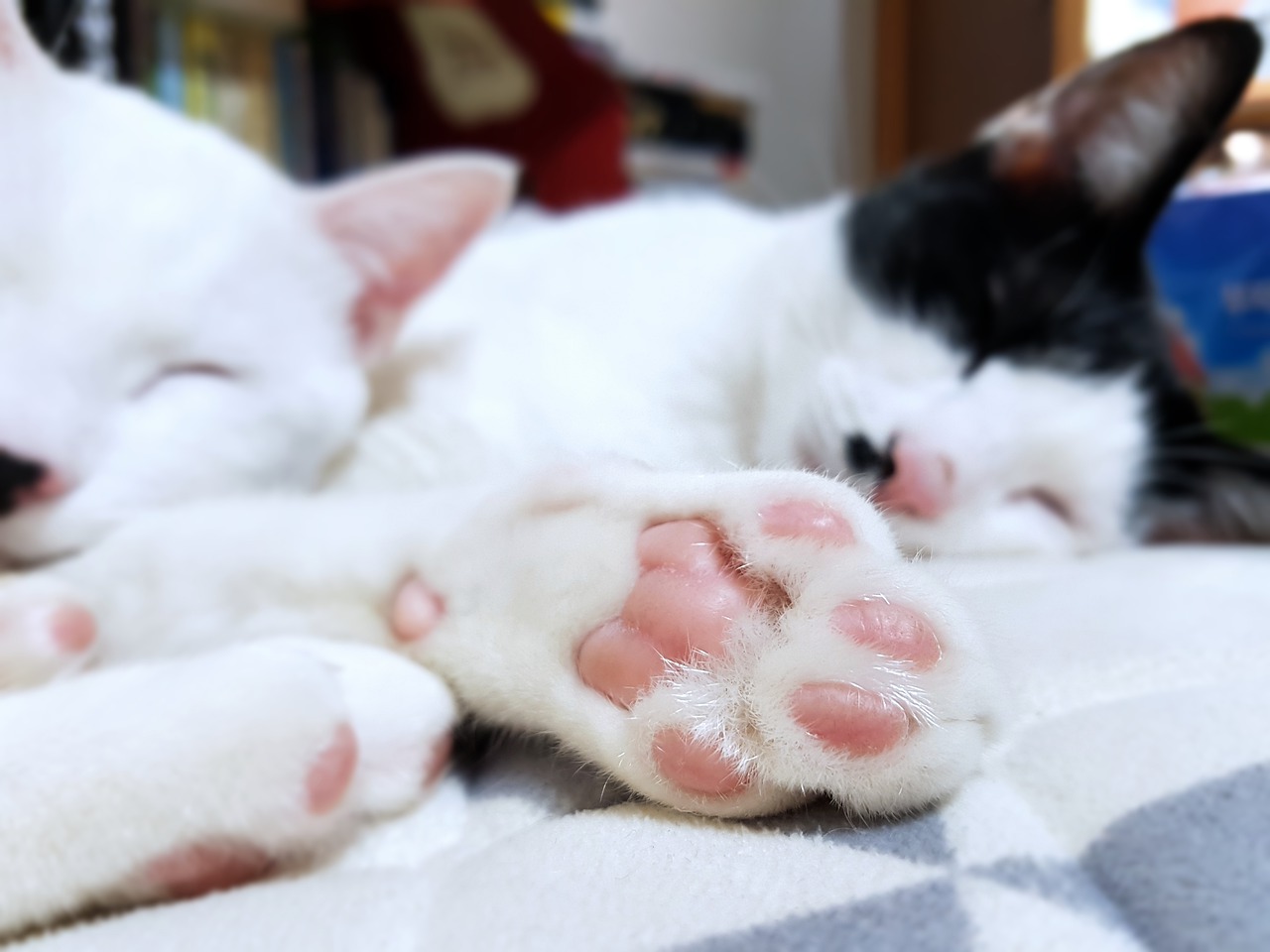 Cats Can Either Be Left-handed Or Right-handed

Cats, like humans, have preferences for the paw they prefer to use.

You may conduct a fun experiment if you don’t believe me.

For the next few days, try enticing your cat to catch something. It might be a toy with feathers, some delicious food, or anything else.

Your cat will likely prefer using its left or right front paw more frequently than the other one.

The bottoms of cats’ paws sweat, regardless of breed or age. The cooling system in their adorable tiny paws comes in handy when they’re under stress, irritated, furious, or simply overheated.

Cats’ extra flexible paws and especially their toes may be easily twisted and contorted, much like our own.

Rubber aids in helping them grasp at anything while climbing, jumping, playing, and hunting.

It’s one of the many reasons why cats are so agile when scaling high and steep surfaces.

Feline paws are designed to walk on the tips of their toes.

Okay, so this information isn’t particularly ground-breaking, but you’ve probably never given it any thought before.

Unlike humans, feline furballs walk, run, and leap using the tips of their toes.

They are also highly patient and peaceful in their movements, which is why they appear to be creepily silent while taking a stroll.

Do you have any additional incredible facts about cat paws and toes that I’ve overlooked?

Why don’t you leave them in the comments section below and surprise me? I’d love to find out what they are!

What Causes So Many Cats To Possess Extra Toes?

Polydactyly is a genetic condition in which one or more paws have extra digits. The majority of polydactyl cats have additional toes on their front paws, although some possess extras on the back feet as well.

It’s due to a dominant gene that has been passed down from parent cats. Even if one cat has normal toes and the other is polydactyl, about 40% of their kittens will have extra digits.

There’s nothing wrong with a cat having extra toes, and they don’t cause any pain. They may even be quite helpful.

Some breeds are more prone to polydactyly, the condition in which a dog has extra toes.

Extra toes were found in up to 40% of Maine Coons in the past, a function that came in handy in the state of Maine, where there are more than 100 inches of snow each year. Extra toes enhanced Maine Coons’ paws to work like snowshoes, allowing them to stroll around outside without sinking into the snow as readily.

Polydactyly, Or Extra Fingers And Toes, Is More Common In Certain Breeds

Maine Coons have had extra toes in the past; up to 40 percent of Maine Coons previously had them, which was a useful feature in the state of Maine, which receives more than 100 inches of snow each year.

Extra toes aided Maine Coons’ paws function as snowshoes, allowing them to walk about freely outdoors without sinking through the snow.

The reason why polydactyl cats are so prevalent in particular regions of the world such as England, Whales, the eastern United States, and Canada may be that sailors viewed them as bringers of good fortune.

The Most Cat Toes

Jake, a Canadian male ginger tabby cat with 28 toes, seven on each paw, holds the current Guinness World Record for most toes on a cat. This may have been accomplished by a Minnesota cat known as Paws.

There’s talk about a cat whose name was Mickey Mouse and who lived in the 1970s. He had had 32 toes, although it’s probable that this cat suffered from “double paws,” a condition where there are two paws that join together.

There are also claims about a cat named Triple with 30 toes on his five legs and six paws. However, it’s more than likely the consequence of having a conjoined twin who never completely developed.