Have you ever wondered which of the oldest cat breeds existed? Recently, I asked myself this question and sought an answer. In my efforts to discover a solution, I discovered a few contenders for the title of the oldest domestic cat breed. The precise age of any cat breed is largely unknown, and there is much debate over it.

However, I did discover a lot of interesting things about several ancient cat breeds. Some of them have been around for hundreds of years and even thousands of years. All of which have fascinating histories and backgrounds. Here is a list of the oldest known domestic cat breeds recognized by man.

Let’s take a trip down memory lane and look at some of these long-lost breeds that are still around today! 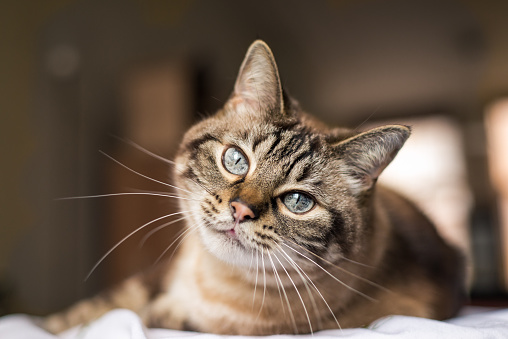 I personally feel that this cat is the oldest recognized breed of a house cat. They are one of the few naturally patterned cats. Apparently, the appearance of an Egyptian Mau has remained relatively unchanged for three millennia. Cats have been depicted in ancient Egyptian artwork that looks similar to today’s Egyptian Mau for thousands of years.

I’m intrigued by the fact that this breed of cat was used in ancient times to assist hunters. I have heard of hunting dogs, but never a hunting cat. They have “bird-like” voices and it is simple for them to inform the hunter there is prey in the area without scaring it away.

The Turkish Angora is a beautiful cat breed that has been around for centuries. The Angora cat has been observed dating back to the 1600s, although long-haired cats were known in Europe since the 1400s. Some people feel that the gene for white fur was passed on to Angora cats as well as the gene for long hair. Although there appears to be a lot of uncertainty about where long-haired house cats originate from, in my opinion.

The Turkish Angora was used to improve the Persian cat’s coat for many centuries, mostly with Persians. Again, there is a lot of controversy surrounding the crossbreeding of Angoras and Persians.

The Persian cats were originally domesticated from the Persian people, who are known as Iranians today. The first long-haired cats were seen in Europe during the fourteenth century, although it is impossible to say what breed they belonged to. They most likely represented the ancestors of modern-day Persian cats.

The origin of the Siamese cat breed is likewise shrouded in mystery. Nobody knows exactly where Siamese cats were originally domesticated and bred, despite their popularity. Some people feel they were bred by royalty, while others claim it was Buddhist monks. However, the Tamra Maew, or ‘The Cat Book Poems,’ a Thai manuscript written in the 14th century, makes mention of dark-pointed cats and implies that the Siamese is an ancient breed.

The Thai Korat was also a historic cat breed from Thailand. They were mentioned in the same book as the Siamese cats, according to the records. The Siamese cat first appears in human writing at about the same time as them, between 1350 and 1767. This does not rule out the possibility that they are considerably older. Korats are commonly regarded as good-luck charms.

The Maine Coon’s reputation as a “gentle giant” and the “dog of the cat world” is well-deserved. They’re also one of the oldest breeds! According to folklore, they descend from cats brought to North America by Vikings or later European mariners who stopped at ports in New England during the 1700s. Maine Coons are descended from Norwegian Forest Cats and a previously unknown domestic cat, according to genetic testing.

The Siberian cat is a kind of cat that is native to Russia. It’s a centuries-old Russian feline breed. It’s claimed that the Siberian is the progenitor of all modern long-haired cats, according to some sources. Another issue regarding where long-haired cats originated arises once more. The Norwegian Forest Cat and the Siberian are most likely closely related. During the first cat exhibition in England during the 1700s, it was one of only three long-haired cat breeds recognized.

The Chartreux, which is a surprisingly ancient breed, was said to have been developed in France since 1559, when it was mentioned in a poem called Vers Français sur la mort d’un petit chat ( tiny kitten’s death-French verse on ) by Joachim du Bellay. The most popular story is that the Chartreux originates from wild mountain cats from the Middle East, like the Turkish Angoras. During the 13th century, it is supposed that Crusaders or merchants brought the cats to France. This breed was continued by monks of Carthusian at the Grande Chartreuse Monastery in southeast France after being brought to France by Cistercian monks.

The Abyssinian is one of the oldest cat breeds, and there are many theories concerning its lineage. Because it resembles relics from that era, some people claim that the Abyssinian is a descendant of ancient Egyptian cats. Of course, the modern Abyssinian is a completely different creature than its predecessors. Modern Abyssinians are produced by crossing Burmese, Russian Blue, and Siamese cats.