Kittens are adorable, and while each of them matures rather quickly (much too fast!), certain breeds remain tiny as adults. Small cats are charming, and they have the same amount of personality as their larger counterparts. Small cat breeds that will win your heart 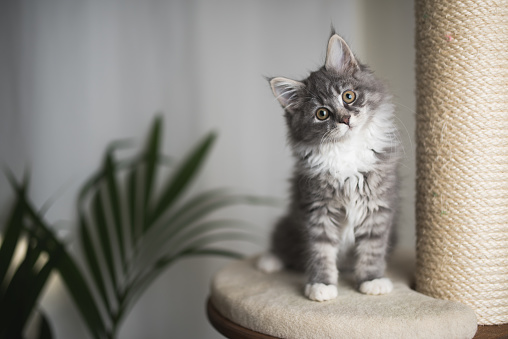 The American Curl is a cat breed named for the distinctive curled back ears that distinguish it. These cats are small, weighing between five and ten pounds, with smooth, silky fur that lays flat against the body. They enjoy interacting with their human companions.

The Singapura is the smallest of all cat breeds, with a weight that can be as little as 4 pounds! Despite his tiny size (he’s only half the size of a typical cat!) he has a tremendous presence. This diminutive breed is energetic and loving, and he wants to know what everyone’s up to all of the time. The peaceful breed is great for families with children and other pets since the last thing Singapura wants is to be alone.

The Balinese cat is a Siamese cat with long hair. These cats have sapphire blue eyes and a plumed tail that distinguishes them from other people’s pets. People are fond of these animals, which are very talkative. They’re also incredibly intelligent and inquisitive. The average weight of a Balinese cat is 5 to 9 pounds (2-4 kg).

Are you waiting for a cat that can keep your children occupied? The Burmese is extremely outgoing patient with youngsters, known to follow the kids around the house, and enjoy being pampered. Burmese cats are little and have a tiny physique, but they have huge brains. They enjoy playing games with their intellect and learning new skills.

The Bambino is a hybrid cat created by combining the Sphinx with the Munchkin. The Bambino has short legs, big ears, and is almost always hairless. In 2005, it was recognized as a breed for the first time. Cats that are this tiny can only survive indoors, where they must have a bi-weekly wash and a warm hiding place.

The Devon Rex has an impish personality, with a delicate face, a tiny body, and huge ears. According to the Cat Fanciers’ Association (CFA), these highly sociable cats don’t do well when left alone for extended periods of time. When he isn’t hanging around your side like a limpet, he’s fetching a toy for you to throw or seeking other methods to amuse himself. However, don’t be fooled by his charming looks; this cat is about snuggling and will be delighted to warm you on a chilly day—cat breed that radiates more body temperature is Devon Rex owing to his short, wavy coat. The breed’s soft, non-shedding coat is perfect for individuals who don’t want to use a lint roller every day.

The Cornish Rex is a hairless cat with a dark coat. The Cornish Rex was bred in the 1950s, and it refers to a curly coat. Males are somewhat larger than females and weigh between 5 and 10 pounds on average.

Despite their modest stature, Siamese cats are surprisingly light in weight. The breed is long, lean, and has the brains to match its reputation as the supermodel of the cat world. They’re not couch potatoes; they need plenty of activity, from fetching. Siamese cats are known for being very talkative. They enjoy offering their thoughts on a variety of subjects and are ideal for those who wish to “chat” with their cats.

Another mixed-race is the Dwelf cat, which was created by combining the American Curl, Sphinx, and Munchkin breeds. These cats are hairless with curled back ears and short legs. They have muscular thighs, a long thin tail, and weigh between 4 and 7 pounds on average.

The munchkin is a tiny cat breed with short legs and a large body that resembles a corgi or Dachshund in the canine world. What it lacks in leaping ability, the munchkin makes up for on the ground—doing laps at super speeds to capture everything they’re interested in. Munchkin cats can’t jump very far, which is ideal if you’re annoyed by your cat on a counter. Instead of leaping to the next surface, they instead leapfrog from one to another and stand up on their back legs for a better perspective, particularly of shiny things, according to TICA.

The Egyptian Mau is a rare cat breed that has naturally occurring markings. When walking, the spots seem to be on tiptoes, and they only show at the tip of the fur. The Egyptian Mau is one of the most rapidly moving cats in the world. And besides its markings, it may be identified by its green eyes. It generally weighs between 8 and 10 pounds.

LaPerms have a fluffy, curly coat that gives them the illusion that they’ve just been to the salon. Despite their long hair, it isn’t difficult to care for. They rarely molt and don’t shed much hair. Daily brushing is sufficient for these tiny felines, which means you’ll have more time to snuggle with this affectionate breed. Prepare for a barrage of deep gazes, purrs, and cat kisses!

The Minuet is a Persian-Munchkin cross. It’s a relatively new breed that was founded in 1996. And is a cross between a Persian and a Munchkin, with the Munchkin’s reduced stature. It’s loving and outgoing. The average weight of this breed is around 5 to 9 pounds.

Because Somali cats are so full of enthusiasm, they’re known as TNT. These little bundles are always on the lookout for a good time, and they want everyone (including you!) to join in. You can keep Somali kitties cheerful by teaching them new skills, providing lots of playtimes, and utilizing cat trees for climbing and window perches for viewing the outside world. Somali cats are known for their love of playing with hair, according to VCA Hospitals. The “hairdresser” gene is in them since these cats enjoy playing with hair (and mustaches and beards!). They also enjoy being accompanied by other feline buddies.

The Oriental Shorthair is a distant relative of the Siamese cat, although it has more color variations. Its eyes are almond-shaped, and its head is wedge-shaped. Its ears are large, and it has a muscular body with big paws. They are energetic, inquisitive, and weigh between 8 and 12 pounds on average, making them one of the biggest cats on this list.