Many cat owners tend to have their preferences when it comes to cat litter. But choosing the right cat litter like crystal cat litter expects to reap maximum benefit both for your cat and you.

Crystal cat litter is among the best in the market and is highly preferred due to its efficiency in controlling odor and friendliness. In this article, we will learn more about the advantages and disadvantages of crystal cat litter to help you understand how it works and reap the most out of it. 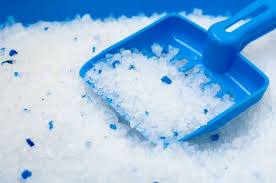 What is Crystal Cat Litter?

This type of cat litter is made from natural silica crystal beads, lightweight and dust-free, or almost dust-free. These gel beads are very absorbent, control odors in their channels, and can be used for 3 to 4 weeks before needing to be changed, making them useful and better than other cat litter types. Besides, it is also entirely non-toxic and has no such clumping or expanding chemicals.

How Do Crystal Cat Litters Work? 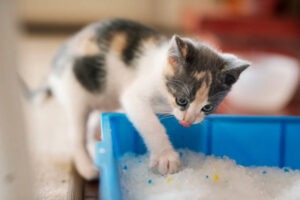 To make the crystal cat litter more effective after absorbing the moisture, you should stir it frequently whenever it is wet. This is essential to evaporate the moisture from the crystals and prevent it from becoming more saturated because very wet crystals won’t absorb your cat’s urine, though, and eventually will lead to litter box pooling on its pan.

Ultra pet is well known for manufacturing crystal cat litter made from high-quality ingredients that deliver superior litter box odor control. Besides, they are different because they are soft on the cats’ paws while offering excellent absorption and odor control.

Ultra pet crystal cat litter is approved by the FDA, meaning it is non-toxic and safe for cats and humans. The crystals are soft, highly absorbent for efficiency and easy scooping, and useful in controlling odor by locking the odor from urine and cats solid waste in its crystals. The crystals are small and non-traceable, thereby minimizing the mess on the floor because they have shallow dust, reducing irritation and allergens.

Furthermore, Ultra Pet manufactured types of litters from scented to unscented and clumping to non-clumping; hence, it allows the client to choose the best to suit her preference or cat’s preference. 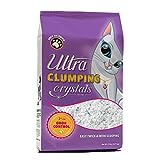 This cat litter is targeted towards typically single-cat owners or houses with multiple litter boxes and are looking for an effective all-around solution. Besides, it is also intended for cats who don’t mind an artificial scent to help with performance.

This cat litter is unique because it makes a hybrid approach by mixing clay with crystals, which is relatively uncommon. Hence, its clumping potential is decent and works well with the ammonia shield to stop any nasty smells in their track and stop bacteria’s growth, keeping them from trying to catalyze for multiple days.

However, its crystals are moderately dusty meaning, it will leave some minor tracking outside of the box, particularly if you have a handy cat who likes to dig a lot. 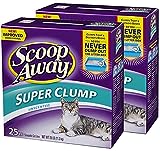 Fresh step features Ammonia Block Technology from Fresh Step stops these primary odor offenders in their tracks by controlling bacterial growth and deactivating pesky enzymes. Its crystals are lightweight, soft, and gentle to minimize dust on your cat’s paws and traceability on the floor.

Besides, the crystals are also efficient in absorbing urine and moisture from the cat’s solid waste, thereby making scooping easy. Compared to other leading clay cat litter, this crystal cat litter locks in odors five times better. Unused crystal cat litter sift quickly through a scooper, making these long-lasting crystals last up to one month for one cat.

Your choice will depend on your preference and the cat’s preference because some of the brands produce scented and unscented, which actually might be risky or friendly with your cat. Also, their pricing matters a lot.

Therefore, it is good to read their properties and decide which one would be efficient and versatile for you and your cat’s needs. 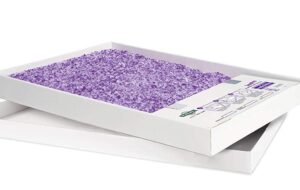 The crystals are capable of absorbing the moisture and eliminating the odors for a bigger window of time, and that means you won’t have to spend as much time cleaning your cat’s box as you would with the other options.

Besides, Crystals don’t clump; instead, it absorbs the moisture in the solid waste, and you will be able to scoop out the solids much faster leaving behind dry crystal thereby saving on litters and frequent changing of the litter.

The crystals are made from gel silica, crystal clear and almost dust-free, making it friendly for your cat and safe for your health.

– Use less than clay litters

The crystal litter has high efficiency in absorbing urine and moisture from the solid waste because the crystals are spongy-like. Hence, it can absorb a lot of humidity, locks odor in its inner channels, and is highly susceptible to evaporation, thereby allowing it to absorb moisture many times. Thus, minimizing the number of times you will change the cat litter, thereby saving litter usage compared to clay litters, since it clumps and can be reused. 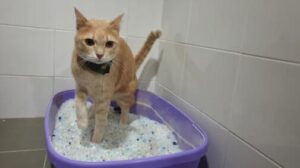 – Some cat may eat them

This is potentially serious, and the chance that your cat may eat some of the crystals is high, for instance, kittens can be prone to eating things they shouldn’t as they explore their surroundings, but some older cats may try to eat the crystals, too. When the crystals are ingested may pose a severe threat to your cat’s life.

– Urine to pool in the litter box

Crystal litter is manufactured from natural resources that have undergone a lot of processing, thereby making it more expensive than other types of cat litter available on the market.

However, due to its high absorbency and odor control ability, it saves on litter usage and minimizes litter change frequency.

Since the crystal beads are small and soft, while some cats may find the rough shape of the crystals painful on their feet when they scratch in the litter box. Thus, posing the cat with the risks of sustaining injuries may hurt the cat’s paws, thereby discouraging the cat from using the litter box to conduct her business.

Yes. The crystal particles may feel uncomfortable to your cat’s paws and may stick to the cat’s paws while scratching in the litter box, thereby exposing her to a high chance of sustaining injuries. Secondly, when the cat ingests the crystals, it may cause digestion problems like constipation and bloating because it absorbs a lot of moisture. However, the lack of dust is a plus for cat owners with asthma or allergies to dust. There is also less chance of bacteria and molds growing in litter crystals.

2. How often should you change crystal kitty litter?

It would be best if you change the cat litter once after every 3-4 weeks. Because the litter has a high absorbency, holds on odor for a long time, does not clump, making it convenient for you to easily scoop the solid waste, leaving behind unused litter, and has a high ability to lose the moisture back in the air. However, this is only possible if you frequently stir up the litter to enhance evaporation to prevent pooling on the litter box pan, thereby making it last longer.

No. Crystal litter does not clump because it only absorbs the moisture and absorbs the odor leaving behind the solid waste dry and odorless, thereby making it the most efficient compared to other cat litters. Besides, the tray doesn’t need to be emptied as often, reducing your daily chores. However, some brands like Scoop-away mix the crystals with clay clumps to mitigate the crystals’ risks sticking into the cat’s paws and enhance clumping for easy scooping.

4. Can you flush crystal cat litter?

Yes. Because it only absorbs urine and moisture without clamping, leaving it in its original form {crystals} thus allowing you to flush it down the toilet. However, you can only flush in small amounts. Still, it is not advisable to flush it in the long run since some are made of rather large pellets, which might also choke up your plumbing, and these materials do not necessarily degrade immediately. The best way of disposing of crystal litter is to toss it in the biodegradable bags meant for cat litters.

Yes. Clumping litter contains sodium bentonite, and it is unsafe for cats. When cats use the litter box, they lick themselves clean; anything their tongues encounter gets ingested. Once the litter is inside a kitten or cat, it expands, forming a mass and coating the interior. Thus, causing dehydration by drawing fluids out of the cat or kitten and compounding the problem by preventing any absorption of nutrients or fluids, thereby resulting in malnutrition, depressed immune systems, respiratory distress, irritable bowel syndrome, and vomiting.

6. Why does my cat eat crystal litter?

Your cat may eat crystal litter due to boredom, pica, if your cat lacks some vitamins or minerals, or another reason entirely. They do so as an instinct to get those nutrients. Besides, they are curious about everything they see, especially kittens if they are weaned too early. The other possibilities that also can make her eat the litter; if he has feline leukemia if she has developed kidney complications that make them get weaker and less efficient.

Yes. Because it is made from mined natural resources. Therefore, environmentally silica litters will biodegrade and are non-toxic, making them a better choice than clay.

So, is Crystal Cat Litter Good?

Yes. It is one of the best litters on the market due to the following reason, they include;

• It is effective on odor control and absorbs moisture efficiently.
• They are trackless on the floor, thereby minimizing mess on the floor.
• Reduces the number of changing the litter.
• They last longer because it minimizes the usage of the litter.
• It does not clump, making it easy to scoop.
• It’s also too light, which means simply buying the litter is simpler but moving and emptying the box is even more comfortable.

Crystal cat litter is one of the best cat litters than others despite its reputation for being expensive. Still, it has proven to be economical, convenient, and reliable due to its improved innovation to meet the customer’s interest and for the health benefit of your feline.