Generally in any cat household, cat litter is an equal necessity to cat food. Kitty litters play an important role in cat households at enhancing easy house cleaning, as well as ensuring a fresh-smelling environment.

Generally, cat litters are designed to destroy or mask the bad odor molecules from the cat’s droppings, as well as clumping the droppings for easy scooping and disposal. However, most cat owners don’t know the minerals and chemicals in their cat litters that make these possible.

Different cat litters are made of different components. Initially, sand, ashes, and dirt were used to fill the cat boxes, unlike today where advanced formulations are used instead. This article will provide you with the minerals, chemicals, and other raw materials used to make kitty litters.

Which Mineral is Used to Make Kitty Litter?

Clay is the most famous mineral in kitty litters since the 1940s when Edward Lowe introduced the traditional clay called Fuller’s clay and has been used since then. Research has it that approximately 60% of the kitty litters in the US are made of clay, especially bentonite clay, while in all the cat litters, clay adsorbent accounts for about 95%.

Clay is a naturally occurring non-metal compound consisting of hydrous aluminum silicates and other minerals such as sodium, iron, and magnesium. Clay is formed through weathering, metamorphism, and hydrothermal alteration. Clay can be obtained in different clay minerals with different properties, thus, different types of clay-based cat litter: clumping and non-clumping cat litters. Clay is mainly used in kitty litters because of the good properties in absorbing moisture and odor control.

Attapulgite, also known as palygorskite is the type of clay mineral that is mainly used in non-clumping kitty litters. Attapulgite consists of magnesium aluminum phyllosilicate and is mainly found in the southeastern US soils. Attapulgite is a good adsorbent attributed to its structure and packing: needle-like 3D crystals. The packing of these needle-like 3D crystals renders attapulgite highly absorbent and porous. Other minerals used to make the non-clumping cat litter include diatomite, zeolite, and sepiolite.

Typically, Wyoming bentonite consists of sodium montmorillonite clay with a high-swelling property and is mainly used in kitty litter. The high-swelling and absorbency features allow it to absorb water up to 10x its weight and swelling up to 16x its initial size.

Silica is another mineral used to make kitty litter, used in the form of dried silica gel. Silica gel can either be used alone to make kitty litter or mixed with other products. The silica gel crystals in kitty litters consist of tiny pores and/or a network of tunnels that allow the trapping of cat urine and odor. Eventually, the moisture or urine evaporates while leaving the odor trapped behind. However, it does not clump by itself.

Due to the environmental concerns associated with clay mining and silica safety, some manufacturers have switched to natural and eco-friendly components. This is to help in addressing the health and environmental concerns. These products include corncobs, wood, wheat, citrus, grass, among others. These products are designed to replicate the clumping and absorbency of the clay litters, using binding products like starch.

Typically, papers have a natural absorbency property, which makes them an ideal alternative for cat box fillers. Paper kitty litter is made from the short fibers from the newspaper recycling process at the re-pulping stage. These short fibers are considered as waste while the long fibers are reprocessed back to paper. To make the kitty litter, the short fibers undergo several processing steps, then the addition of an odor control agent, and finally packaging.

Grains are also used to make the kitty litter, especially the hard grain byproducts. The process involves milling hard grains to the required sizes for mixing and pelletizing. Small corncobs and catnip are added during the process for fragrance. One of the advantages of grain kitty litter is the natural enzymes in the byproducts that naturally control the cat box odor. 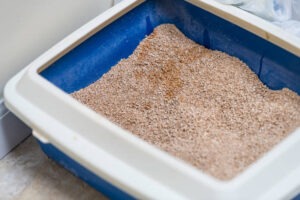 Talking of the minerals and components used to make the kitty litter, the odor control components are part of them. Typically, clay and silica have their natural odor-control properties, but there are other components added to the kitty litter to help trap the bad smell. They include;

Both baking soda and carbon are widely used in most of the commercial kitty litter to control the bad smell from the kitty litter box. These products work by trapping the odor from the cat droppings just before they develop out of the box.